FIA Statement Response – All the details.

This could be one of the most anticipated 2019 F1 car launches due to the ‘dynamic duo’ – no other than team-mates, Daniel Ricciardo and Nico Hulkenberg who will be driving for Renault for the 2019 Formula 1 season.

Over the past few weeks, we’ve seen the two drivers sharing an insight into the work going on behind-the-scenes at Renault along with videos on their social media channels showing a fun side to things.

Today, Renault unveiled it’s 2019 F1 car, the R.S.19 – well, the chassis at the launch was the 2018 model however there were elements of the new design and you know what? I like it.

As with many Formula 1 fans, I really hope this is the start of the team moving into the right direction – allowing their drivers to battle and overall, the Renault F1 team showed confidence in the season ahead.

Cyril Abriteboul: “This is the right time to show you all that has been going on in the background of the last three years and we are extremely proud – the most important thing is that we don’t stop, we don’t break down the momentum that has started.”

“For three years, it is clear that we have been having a nice and steady progression which is good both at the track and back at the factory – I don’t want to say anything else, that would be killing it….”

“I would like and I believe that this can come from the engine side, where we have had in particular a very, very strong winter so that will typically be a good season.”

“On the chassis side, the Enstone side, we have the structure but it is going to take a bit of time before the structure can turn into a race winning car.”

Front Suspension – Carbon fibre top and bottom wishbones operate an inboard rocker via a pushrod system. This is connected to torsion bar and damper units which are mounted inside the front of the monocoque. Aluminium uprights and OZ machined magnesium wheels. 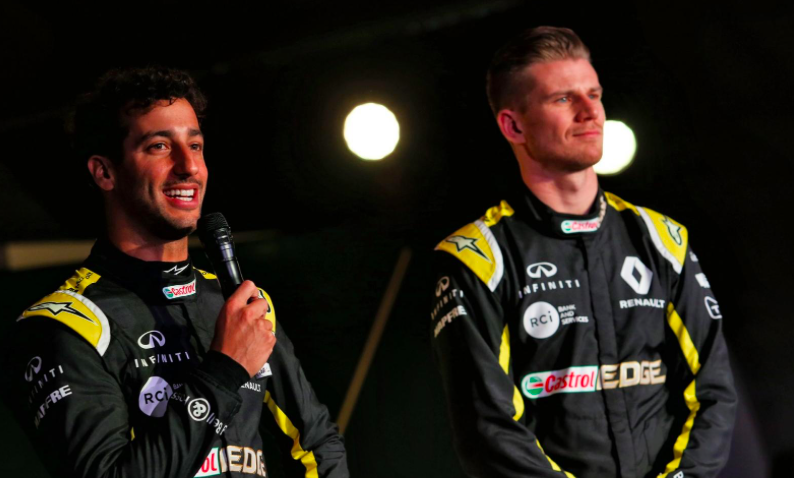 Thank you to Renault F1 for the images.