It’s the final race of the 2018 season and it looks like we’ve got a good race on our hands, even though there’s no championship battle. Everyone will be racing to end the year on a high and this could include not listening to team orders!

With Mercedes setting the pace yesterday, there’s Ferrari and Red Bull right behind who will want to deliver and push the cars to the limits.

It’s been a busy morning for the drivers and below, you can see everything as it happens – live.

Drivers are out for the track parade.

The atmosphere is building for the end of the year and there’s excitement for the last season of the 2018 season.

Lewis Hamilton: “There’s a race to do today, the pressure is always on, it’s never really off – ultimately, we still have a race to do. There’s a different feeling here though as you’re just racing but we still have this today and I want to finish on a high. The fans has been amazing.”

Will Smith: “I am having a ball here today, Lewis and I have been talking about this for about 5 years – I first came in Monte-Carlo, I’m here supporting my man, supporting the World Champ. I dropped a couple of pounds if I need to get in the car.”

Kimi Raikkonen: “If I’m not wearing red does it mean we don’t do interviews next year? (Laughs) – I’m not treating this race any different, we will do our best. It will be challenging but it’s the normal story.”

Sebastian Vettel: “I’m going to enjoy it and I’m going to do what I can for the year – we hope that Kimi will be able to secure third place. We haven’t had any problems as team-mates.”

Kimi Raikkonen: “I’ve looked after him so he doesn’t start crying….(laughs).”

Fernando Alonso: “It’s great, so far it’s been good – I want to celebrate the weekend after the race and I am very thankful for all the messages of support I have been receiving all weekend and now, I am going to do all I can to put on a good show for people today.”

Since his announcement, Robert Kubica has been talking to the media about his return to Formula 1 and what he’s ready to face next season.

Robert Kubica: “I am excited to announce this and we have spoken about what I have to discover. The more I talk and think about it, the more it’s pumping me up. The only thing I am thinking about is the street circuit and the wider cars – I will now have to face new and more exciting things. I am looking forward to this and it will be a nice challenge.”

“When you have limitations, you have to allow yourself to think and do what you feel and what your brain is telling you – you always have to improve. Of course, I am now starting from a different level, I know the car and I know the rules – I am ready.”

For the final time of the 2018 season, the drivers are making their way out of the pit-lane, round the track and onto the grid for the 2018 Abu Dhabi Grand Prix.

The sun is shining but shortly, the sun will start to set and temperatures will begin to change throughout the race.

Fernando Alonso: “It’s still feeling normal, you have so many things going on in your head and you don’t have much time to think – I think, this evening it will be different.”

“I will try to take care this race, I don’t want to be having an accident in the first few corners – I want to have a good race. It’s a ‘goodbye for now’.”

Fernando Alonso looking a little bit emotional on the grid in his final interviews before the race.

Alain Prost: “Yes, next year – I think we can close the gap for sure. We are working very hard on the engine side. We wanted to be better this year but we are working hard and we are getting close. We are working differently and that is our target for next year.”

Drivers are now making their way round the circuit for the formation lap – getting their cars and tyres ready for the start of the race.

Bottas being told that the temperature will be around the 39 degree mark.

There’s also talks of rain in the race, this could change things up – 40% chance at the moment.

Hamilton gets away in the lead.

A MASSIVE incident – Hulkenberg gets hit and the car spins. He’s trapped at the moment but talking to the team over the radio.

Hartley comes into the pits. Hulkenberg is out of the car and making his way to the medical centre.

Safety car ending this lap – Hamilton backing up everyone and managing the pace.

There’s sand all over the track – you can see the trail on track.

Max Verstappen now making his way past Perez – now, he has Ocon ahead of him.

Oh –  a battle between Max Verstappen and Esteban Ocon, the two touch however Mx Verstappen just manages to make his way by.

The team telling him different settings but sadly, it’s not working….

KIMI RAIKKONEN IS OUT – his car has stopped on the track. 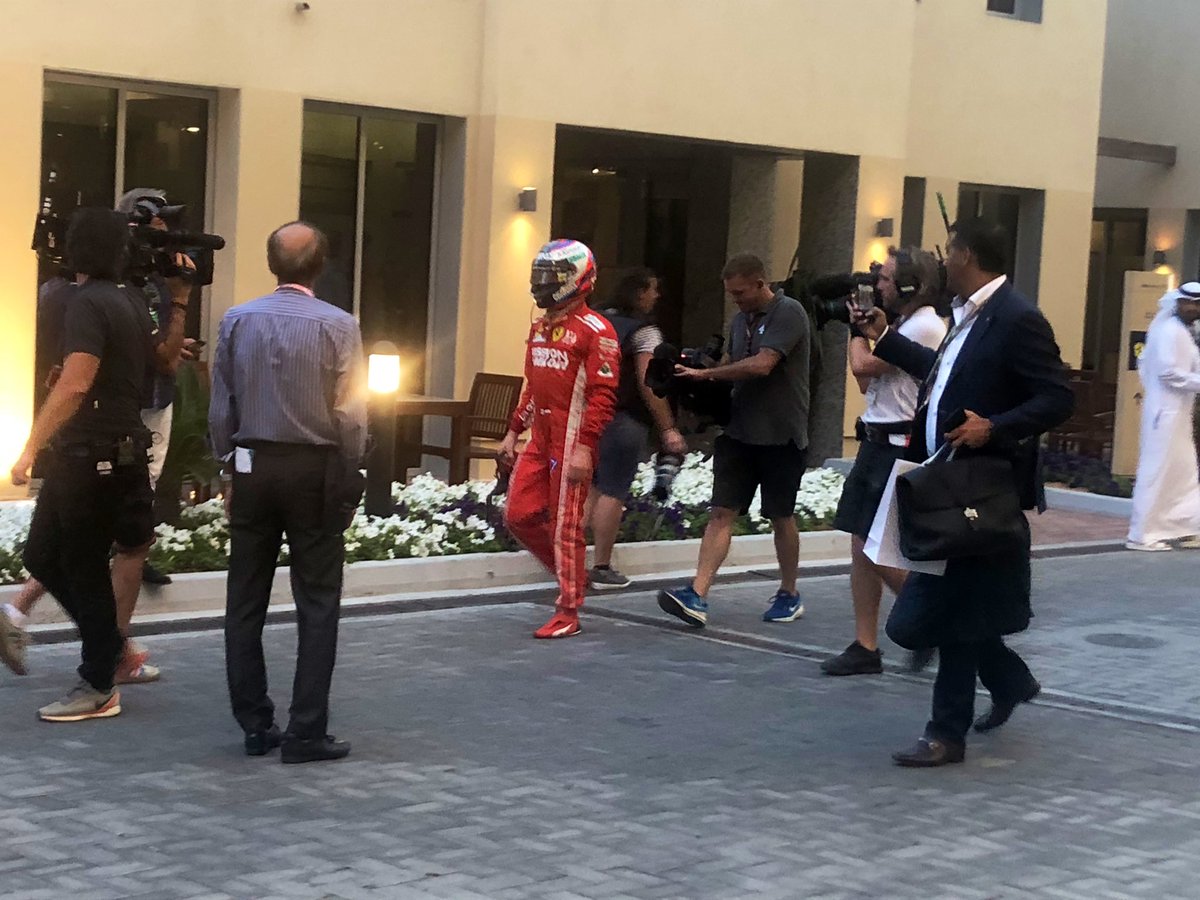 Lewis Hamilton comes into the pits – he’s now making his way back out on track.

Lewis Hamilton now out behind Max Verstappen. The cars in front of Hamilton, haven’t come into the pits.

Hamilton asking if the team knew that he would be out behind the drivers who are ahead of him – team telling him they knew.

The drivers haven’t come into the pits yet and this should be a 1-stop strategy.

The battle between Hamilton and Verstappen still ongoing – Hamilton has dropped back slightly. Probably the best move, drivers haven’t come into the pits so it’s all about tyre management for Hamilton too.

Daniel Ricciardo being told that he’s faster than the cars ahead – Bottas is currently in the lead with Vettel in second place.

Hamilton has dropped back slightly from Verstappen which is probably the best move – for now.

Sebastian Vettel now comes into the pits – Bottas remains in the lead. Ricciardo, Verstappen and Hamilton make up the other three drivers.

Bottas now comes in the pits, Ricciardo takes the lead.

It’s Ricciardo, Verstappen, Hamilton who make up the top 3.

Max Verstappen comes into the pits, he’s behind Vettel now.

The end part of the race is something not to be missed.

Team to Hamilton: “There is a threat of rain – it’s nothing too much but we’re expecting it on the main straight.”

All the teams are constantly checking the weather radar.

RAIN – there’s drops of rain on the track!

The rain is getting a little stronger now – no tyre changes have been made….

Marcus Ericsson is slowing down – he’s losing power and slowly trying to make his way back to the garage. His final race for the 2018 season hasn’t ended well.

Leclerc now makes his way past Alonso – Alonso running a relatively good race, now with Leclerc making his way past, he’s in P10.

Fernando Alonso now comes into the pits – his final race in Formula 1 (for now) and what should be his final pit stop in Formula 1.

Wow – a battle between Grosjean, Vandoorne and Ocon – at one point, 3 drivers alongside each other and Vandoorne makes his way past, taking the lead for P11.

Sebastian Vettel now closing the gap to Valtteri Bottas – in the meantime, Ricciardo is in the lead and hasn’t come into the pits yet!

Ocon now wins the battle and makes his way past Vandoorne – a wonderful battle between the drivers, respecting each other but pushing their cars to the limits. 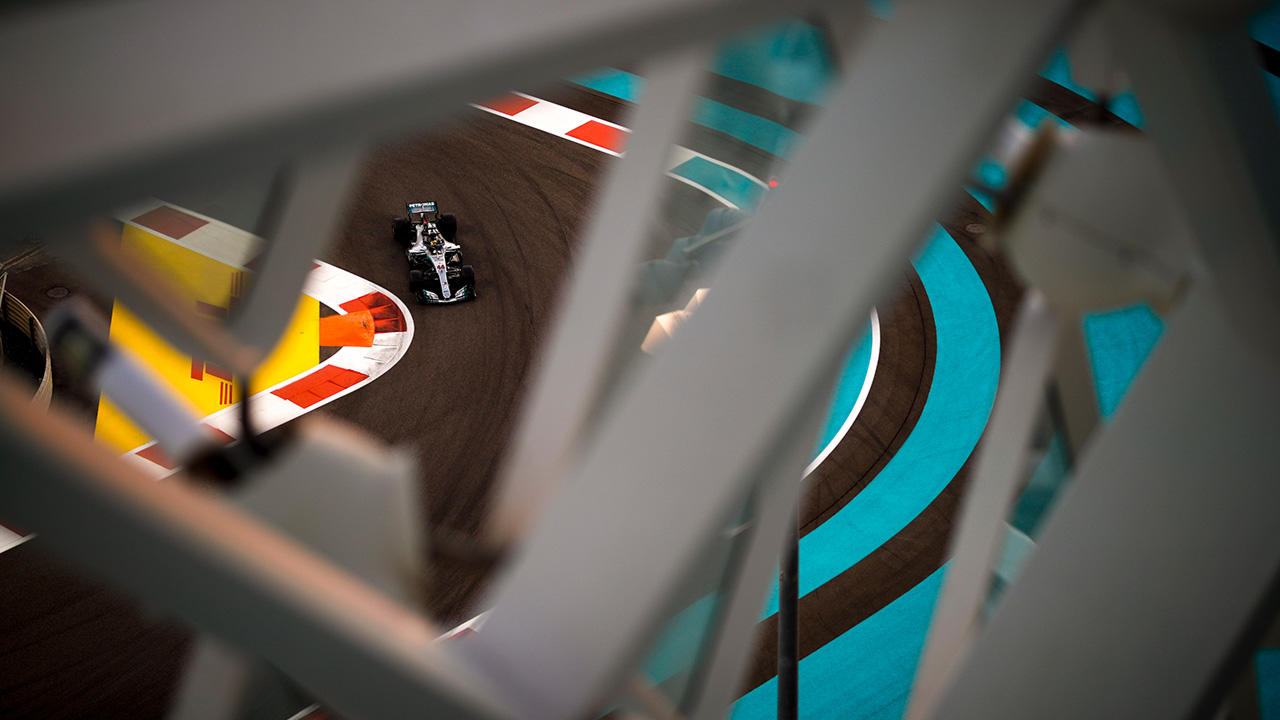 Daniel Ricciardo still in the lead – he’s managing his tyres perfectly and hasn’t come into the pits yet.

At the same time, Max Verstappen has now started to close the gap to Bottas – this should be a battle.

Hamilton is now in the lead following Ricciardo’s pit-stop. Verstappen is right behind Bottas who’s struggling on his tyres. At the moment it’s Hamilton, Vettel and Bottas, Ricciardo has now joined his team-mate, he’s a lot faster and looking strong so the latter part of the 2018 Abu Dhabi Grand Prix should be a good one!

Ricciardo now makes his way past Valtteri Bottas – it’s an easier move for Ricciardo who breezes past easily.

Valtteri Bottas now comes into the pits – the team telling him: “we pitted you as we saw something concerning on the tyre after contact.”

Ocon losing power on his car – he’s lost power at the start of the pit stop with volunteers having to push his car out of the way.

Pierre Gasly also has a problem with his car – there’s smoke coming from the car, he’s trying to make his way back to the pits.

An issue with Verstappen’s car – he’s currently running in P3.

Ricciardo just behind in P4.

Lewis Hamilton still leading the race – Vettel in P2 and Verstappen in P3.

Sebastian Vettel and Max Verstappen are in P2 and P3 – a great way to end the year for both teams, it has to be said.

A lovely way to end the season – Lewis Hamilton, Sebastian Vettel and Fernando Alonso all driving alongside each other, putting on a show for fans.

Here are some brief interviews following the Grand Prix.

Lewis Hamilton: “This is incredible, thank you to everyone for all the support. I’ve driven with Sebastian from our Formula 3 days and it’s been amazing to drive alongside him.”

Sebastian Vettel: “It’s been a tough season but he’s a well deserving champion – a lot of races, a long year and I will try, the whole team will try to give him a harder run for next year.”

Fernando Alonso: “As long as I am not commentating I will come and see you all. I feel very privileged and I will always be a fan of this show.”

Lewis Hamilton: “It’s been an amazing privilege to drive alongside Fernando Alonso, all weekend people have asked me if I will miss him and normally, I don’t miss people but with Fernando, he was a driver I looked up to and he will be missed in the sport, in the paddock and we will all miss him.”

Max Verstappen: “We tried to go back and put a little bit of pressure on the guys ahead, I had good pace but there was oil leaking and the last few laps, weren’t great, they were difficult. but overall a good race.”