This win has been a long time coming for Scuderia Ferrari driver, Charles Leclerc and yesterday, we say him take his first win at the 2019 Belgian Grand Prix.

It couldn’t have been a more fitting win for the driver. Dedicating his first Formula 1 win to his close childhood friend, Anthoine Hubert – the Formula 2 driver who passed away during his Qualifying session on Saturday.

Whilst the win was celebrated, the overall mood was very respectful considering the consequences – always remembering that whilst motorsport is fun, there’s always that element of risk.

Before the race, we had the silence where drivers gathered on track – joining Anthoine Hubert’s mother and brother. Pictured below with Charles Leclerc.

Fast forward to the race, we had a start which saw Max Verstappen and Kimi Raikkonen come together.

Resulting in Max Verstappen going off-track and into the barrier – ending his race and what should have been a decent race for him.

Leclerc remained in the lead and as we saw throughout the race, there wasn’t too much of a threat for him.

Ferrari’s strategy worked out great and with Sebastian Vettel playing his role – keeping the Mercedes back as much as possible, up until Lewis Hamilton managed to make his way by.

It was a good day for Mercedes who managed to score P2 for Lewis Hamilton and P3 for Valtteri Bottas.

For Alex Albon, this was the first race for him driving as a Red Bull Racing driver. He impressed by driving well and after the race he said “the care came alive” for his debut!

Pierre Gasly who was demoted from Red Bull Racing, down to Toro Rosso also drove a good race – like he’s trying to prove his worth again. No one can say that Pierre Gasly isn’t talented – the pressure from RBR got to him.

Lets take a look at driver reaction from after the race.

Charles Leclerc: “This is adifficult to enjoy a first victory on a weekend like this.”

“I grew up with Anthoine, and we competed in our first karting race together with Pierre Gasly and Esteban Ocon in 2005. These are memories I will keep forever.”

“Losing him yesterday was a huge shock, not only to me but to everyone in motorsport.”

“In a way, I am satisfied having won today to remember him in the way he should be remembered. He was a champion, and this victory is for him.”

“The race itself was good and nothing would have been possible without the amazing car the team gave me. We made good improvements in terms of race pace and tyre management this weekend.”

“The last few laps weren’t easy. I saw Lewis coming closer and closer in the mirror, so I put my head down and tried to focus on the work I had to do in the car.”

“At the end, I managed to cross the line in first place and I’d like to thank the team for the hard work they have put in to make this possible.” 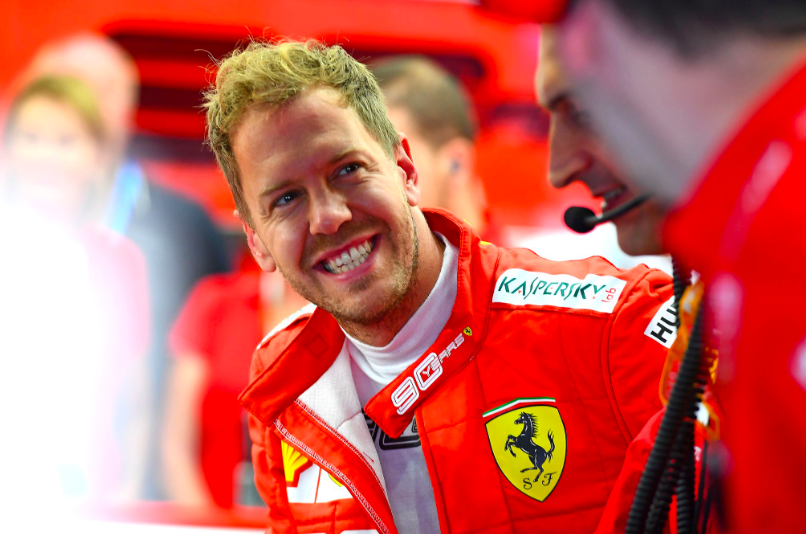 Sebastian Vettel: “It was not by any means an easy race for me. At the start I managed to retake my position from Lewis but then I began to struggle with the tyres and I had to stop earlier than planned.”

“With the medium tyres at first I managed to maintain a good pace, but then it dropped again.”

“I tried to keep second place but I couldn’t do it and at that point, the best thing to do was to pit once more for tyres and carry on without struggling so much.”

“We have to understand why my car had such high tyre degradation and we will do a full analysis of the situation to understand the reasons why I did not feel comfortable.”

Valtteri Bottas: “It’s been a tough weekend for everyone after yesterday’s sad news. I was trying as hard as I could out there but not many opportunities came my way.”

“The race pace felt OK, but Ferrari were stronger on the straights as we expected. I was maybe lacking a bit at the end of the first stint with tyre drop off but the second stint was strong. However, there was no other opportunity for me to attack before the end of the race, so we decided to save the engine and the gearbox.”

“Spa has normally been a difficult track for me, but we made up a position with better strategy and I actually think this has been my best performance here.”

“Now we look to Monza where we expect Ferrari to be quick again, but we’ll push hard to fight them.”

Lewis Hamilton: “It’s been a very difficult weekend for everyone in motorsport and today I raced with Anthoine in my thoughts.”

“In general, it’s been a wobbly weekend but to have a solid Qualifying and then a solid race today, I’m really happy. Of course, you always want to win on a race day, but I gave it absolutely everything I had.”

“Ferrari were a very strong force but for us to be that close at the end means there are plenty of positives to take.”

“I’m happy for Charles, he did a fantastic job all weekend so congratulations to him.”

“We’ve got a lot work to do to try to catch up to Ferrari on the straights in the next four days, but if anyone can do it it’s this team.”

“Hopefully we can have another close race next weekend in Monza!”

Max Verstappen: “It was of course not a great end to the weekend but it’s not the worst thing that can happen in life as we have seen yesterday, so I cannot really call this frustration.”

“I got a poor start, the reaction was not great and then I got wheel spin when I released the clutch. I tried to stay on the inside into Turn 1 but I think Kimi expected to be fully ahead of me and just followed his line.”

“I don’t think you can blame anyone and I guess he just didn’t see me, once I was next to him and he was turning then we couldn’t back out.”

“We touched, my track rod was broken so I went straight on into the barrier at Eau Rouge and the race was over.”

“These things happen, it’s very unfortunate for the team and we will of course try and do better next week.”

Alex Albon: “I’m very happy. P5 is an amazing result and we’ve got off to a great start.”

“I had some good fun out there and I enjoyed this race a lot. I started off the weekend very nervous and if you had told me I’d finish the race fifth I’d be very happy, but I’m a bit more relaxed now.”

“It was actually a difficult race and in the first stint I struggled with grip in the dirty air and couldn’t overtake anyone. But then once we pitted for the soft tyres, the car came alive and I was like – now we can do something!”

“The last lap was really good, I had a good fight with Sergio where we were both on the grass and it made for some good racing. There are definitely some areas I need to improve on and over the next few days I’ll get my head down, do some homework and address them for Monza.”

“I will sit down with the Team and understand why I struggled at the start, but I am still finding out the car’s little tricks and adapting to it.”

“I didn’t really feel too much pressure coming into the weekend, I think the media thought I was going to, but I’ve enjoyed my week with the Team. It’s been a good experience and a different way of working.”

“Last night was very tough, us rookies knew Anthoine very well, so it’s been a stressful few hours and this morning felt strange. When you know a person and when they’re at the race track, it’s a very difficult atmosphere, so we dedicate this race to him.”

Carlos Sainz: “Obviously a disappointing grand prix, not being able to race. We definitely need to look into what happened today. It’s obviously not very good news if you cannot even start a race. So nothing to say.”

“A shame also about Lando’s retirement on the last lap that prevented us from getting another 10 points in the championship, which would’ve been a very big step in the right direction.”

“I’m sorry for the whole team. I don’t think we deserve these two DNFs. At least the pace of the car showed today that there was a lot more to grab than single points. We move on.”

“What happened yesterday puts everything into perspective. It was the toughest reminder that motorsport is extremely dangerous and everyone needs to be aware of the inevitable risks it involves.”

“Our whole community is going through a very tough and emotional moment and all my thoughts go out to Anthoine’s whole family and his friends.”

“We will always carry his memory wherever we race. It is the best tribute we can pay to our fellow driver. Rest in peace.”

Lando Norris: “First of all, my thoughts today are with Anthoine’s family and friends. My deepest condolences to them.”

“With my race, it wasn’t boring. It was still fun and exciting. We had an extremely good start, the launch was very good and in Turn 1 we managed to pass six cars in one go and get into fifth. We controlled it from there.”

“I think we have some positives to look at. Everyone in the team did such a good job and losing the engine on the last lap was tough.”

“We have to move on from this and get ready for Monza.”

Kimi Raikkonen: “Unfortunately my race was already over in Turn 1. I had to slow down as Bottas was at the outside and the next thing I know I get hit and I’m on two wheels.”

“Afterwards it was nearly pointless to stay out as there was a lot of damage to the floor but you never know what’s gonna happen so we did the whole distance.”

“Really a shame as we had a strong car today.”

Antonio Giovinazzi: “The car has been really strong today and therefore it’s even more disappointing not to finish the race with an accident in the last lap.”

“Our strategy was great and we would have been in the points and for this I feel sorry for everyone in the team, but I guess that’s racing.”